State of Hindi in India. 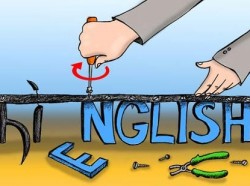 What happens when a new kid takes birth ?
Well there are two situations -
If the parents are educated they want either to talk with that kid in English or at least start teaching him all the English basics right from the time when that kid is able to speak.
If parents are uneducated then they talk in their local languages but they feel that unique sense of pride when their kids speak English so they admit their kids to some good coaching class for English by toiling and sweating some extra bucks.

Both of parents try and admit their kid in some good English medium school if they can afford as people are ready to pay some extra bucks for this foreign language to make their kids more secure and successful when they grow up.

Well, everyone(at least most of them) has a notion that any Educated person must be fluent in English otherwise he is obsolete considering current scenario in India.

When you get into the college , most of the fellow classmates expect you to speak English. You need to deliver seminars and debates in English. Infact there's no sign of our national or regional language at all.
You've completely lost that connect with that local language which you mostly spoke or grew up speaking.You used to love it once upon a time or at least never hated it, as it wasn't the alien mode of communication in your locality.That language was known even to the beggars in your vicinity without getting into the school.

Our Republic and Independence days are celebrated almost completely in English by our Government. I don't remember hearing our Prime Minister speaking Hindi(because it is our National Language at least on paper ) in any of the public addresses. Our courts also have started adopting English as their primary language . Not to mention English schools are stealing students from local schools resulting in bankruptcy and finally, disappearance.

Yes Bollywood or other Cinema industry is the only reason we know so much Hindi or some other regional language, we cannot deny this fact to some extent.

If things keep going like this I don't see any future of any of our regional languages bright. It might be a bit bitter to digest but ideally that day is not far when people will talk to each other in English only and other Indian languages will be seen only in books just like the ancient scriptures and monuments in the museum. No one cares but we are losing our ethnic essence by adopting this alien language gradually. That day is not far when English would be our National Language (which is already informally) but India would still be called Hindustan( the country which speaks Hindi).