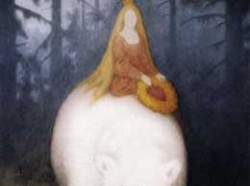 We are all stories.

The stories we make and those we own. Stories can be shared or told at nigh all alone.
Some may be good, others bad – some enjoyable whilst others sad.

This here is my story I have written it true.
Perhaps of Heroes, or children or you.
Either false or real, of Lucius or the Prince of Dover,
Like a great oak-door, a story often has a beautiful cover.

Now, do read on and enjoy your time.
This story is solely mine.
My aim however, with sharing it with you,
Is to expand its life, to share it with you.

That being said, a question I ask,
what is your story? Is it up to the task?

One day a long long time ago two people decided to climb a mountain. The first one's name was Tale, the second's Notale.
Meeting at the foot of a big mountain, they shake hands and agree that the first to reach the top will decide what to do around the campfire. Tale wants to hear a glorious adventure - maybe by a bard – of knights and princesses, and dragons and fairies. A simple tale of woe and joy, and of black and white. Notale gladly accepts and tells Tale that if he is the victor, they will make some gourmet food before climbing back down again. Notale has a lot to do and would like to be home before nightfall.

That agreed, they start their ascent. Soon they are both perspiring and gasping for air. The climb is steep. Notale has a small lead, but Tale is right on his heels. Even with the sun beating down on them from overhead, they stop for nothing. Both want to win. Tale wants his story and Notale his dinner and a date with his computer. The rocks are slippery and covered in moss – still wet from the rain the day prior. Nonetheless they trudge on, faces down and sweat dripping from the tip of their nose.

Midday arrives as they pass the point of no return, they are halfway there. Tale is now leading, he really wants his story. Mustering all his strength, Tale ploughs on ahead, determined to win.

The peak is within sight and Notale is anxious he might loose. But then, as Tale has just started the final ascent he slips on the moss and falls tumbling down “BaDumBaDumBaDumBaDam”, all the way down to the foot of the mountain. With Tale gone, Notale leisurely conquers the summit and laughs merrily.

“Tale won!”, the three children scream all together. Rubbing his white stubble and adjusting his glasses, grandpa answers “Haha, No Tale lost sweethearts. Looks like there'll be no tale tonight”

Grandpa's wrinkles flex and twirl about in a grimace. He coughs and kisses them each on the cheek before telling them there will be no tale, because Tale did not win. “Perhaps tomorrow”, he reassures them. The three children rub their cheeks, part in confusion and part because Grandpa had pierced their cheek's with his three-day stubble.

“Nooo, we can't go to bed without a like this. We'll stay up and scream all night if we have to. Tell it again grandpa, but this time with Tale coming out on top!” “Hmm, I guess we can try it again, who know whom will win this time around?” Grandpa's face seems like an ocean. Big wrinkly waves float around on his face until he can no longer contain himself.

The waves bursting out into a smile, grandpa laughs merrily before telling the story again. Like the first time, Tale and Notale agree that who is first will decide. Also like the first time, Notale has a firm lead, but soon falls behind Tale.

Suddenly, something strange happens. Notale leaps out in an all-out sprint and rushes past Tale- Heading to the top, Tale has no chance of catching up to him. It seems there will be no tale after all. The children vail in symphony, disappointed Tale will not win. But as Notale is only meters from the summit, he slips on the moss and falls tumbling down.

“BaDumBaDumBaDumBaDam”, grandpas hands play the role of Notale – rolling down the slope.
“Yeaaah! What Tale, what Tale grandpa?”
“Hmm, I don't know dears. You have anyone in mind?”, he replies.
As the children think, eyes scanning their minds interiors for their favourite, Grandma comes in with a cup of hot chocolate – Brown and steaming and topped with two dashes of cream and three marshmallows. How appropriate.

For some time, they quarrel whether to hear grandpa's eloquent rendition of Sleeping Beauty, but decide that its pace is somewhat off. They want something faster and more action-packed. Turning down Sir Lancelot and the Ash-lad and his Good Helpers they realise they have not a clue what they want to hear. Ali Baba and the Forty Thieves is a good one too – for sure – but they have all heard them so many times already. Not that they are not any good, it's just that they want something new and they are all thinking the same thing. As grandpa removes his thick-framed goggles to wipe them clean, one of the three children leans in and whispers in one of the others ear “I wonder, if we dally for some time maybe grandpa will find a new one for us, like he always does” “Ha, good idea I was just thinking the same thing”

Their cups are half-empty as grandpa puts his glasses back on. They tell him, voices filled with frustration and anguish, how they can not agree on a tale.
“No worries children, I have just the one. A good one this time, a tale like you have never heard before. I assure you, this will be nothing like “The Emperor's New Clothes”, I think it might prove even more wondrous than “A Christmas Carol”

The children all sigh in amazement, faces and clothes covered in cocoa before Grandpa takes it back “No what am I saying? those are all classics, nothing can beat them.”
Grandpa rises and stokes the fireplace, only embers remain so he throws another log into and teases it with his stoker. With grandpa sitting in his red velvet chair, the children wait patiently.

Snows howl past the window, but their little room - barely big enough for three children, a grandpa and a fireplace – is smoking hot. Grandpas's brow twitches here and there, his eyes have sunken well into his forest. He is clearly thinking about some exciting story, dwelling upon whether or not this is the right time to tell it or not. He should decide soon, their cups are almost empty. Then, what seemed to little minds like an eon later, grandpa has an epiphany.

Winking them over, the children hop out of bed and scurry past the wooden tiles on bare feet. There and then - with only the warmth of their pyjamas, the fireplace and grandpa to keep winter at bay – grandpas takes the smallest of the children onto his left knee. The next biggest is allowed to perch on his right. In his lap sits the biggest one of the three.

As the embers crackle, the snow bite at the window and the room darkens, grandpa whispers

“It is decided. This here is a tale you have not heard, nor are you to hear its like again. Tis the tale of the Vicar of Kvaanskie and his helpers nine”

- Dedicated to Grandpa Nils, who always amazed us with his storytelling.
Vale!