The best Television commercial ever (for me) 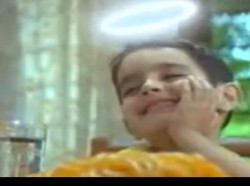 Oh that's been an era, long ago when I was a kiddo and really the advertisements on Doordarshan made me delighted.

There was the an ad of Dhara oil one of my favorites :), I can say everyone would have seen it at least once and it would be there in their minds, though buried deep inside but pretty sure it is... because it was so damn cute than no one can ignore .. oh my god I love that boy cutie pie bubbly sweetu and the way he speaks,

A small boy carrying a side bag and walking on a railway platform goes and sit on the bench, one old man came there on a cycle as he was passing by boy say's in his kiddish voice "Ramu kaka" and man replies "arre Bablu tum yaha kya kar re ho?" Boy- "sab gussa karte hai, mei ghr chod ke ja ra hu" Man- "par ghar par to mummy ne garma garam jalebi bnai hai" Boy- Jalebi and then man took the boy back to home he started grabbing the jalebi from the plate his mom came n says to "kya tay kiya apne?" hmm Boy- ahhhhh... jana to hai his dad interrupts n says "Par 20 25 sal baad hmm" HAHAHAHHA and everybody starts giggling with such a nice background music the ad ends,

I was so fascinated by this ad that while watching it with whole concentration my mouth becomes watery n the only thing that came out was mummy ap kyu ni banate banao na please mummy, my mommy use to make me understand yes beta khilayenge apko bhi but i was like as his mom made it quickly u should also na, I was about 5,6 years old that time, ohh my god my mom was really pissed when ever she hears me saying that line.. One day I also added that "mei to ghar chod kr chali he jaunge aur ayungi bhi ni kyunki mere mummy to jalebi bnayege he ne..."...oh my god that time my mom n my aunt, all of them laughed on me as I had cracked a funny joke n I was like ??????? why are they laughing???

But the ad was my favorite n till date if I think of the add or that time it leaves an unending smile on my face.. I just watched it a time back on you tube n so I thought to share it here..

So it was "The best Television commercial ever for me" many more came after that as of cad bury, coke, boom-ber n all,.

but this was my 1st favorite n still it is in my thoughts clearly so that means it was best.