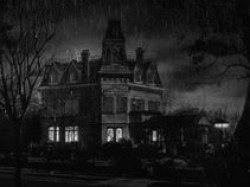 The house was old and dark. It seemed that no one has ever stepped a foot here in near past. It was raining cats and dogs. Rohit didn’t have an option but to enter the house and take shelter. Though he ran, but his shirt was already drenched in. He looked at his watch ,”9.30.Dont know how much time I will have to wait here.” The cloud seemed heavy and the sky sparking with lightening. The mobile was low on battery.
Rohit Basu is a first year b.tech student. He had his school reunion today. The programme finished late. In other days he would have availed an auto or bus. But today the weather made this chance highly unlikely. He decided to walk. The faster he walked the fiercer the wind became. And in no time a gush of water droplets started to pour. He wanted to take shelter, but no shop was open and the locality seemed sleeping dead. Rohit finally spotted the murky aged house and took refuge. He thanked God and took out his mobile to inform his parents. But the phone didn’t start.
”Oh!God. Either its fucked up due to rain or the battery is dead.”Rohit thought worryingly. He recorded the whole function in his phone, so there may be high chance of the battery being dried out.
The whole area had black out. Suddenly he saw three figures approaching from the other side of the house. They didn’t notice Rohit.
“Let me leave,please. What do you want? Let me go”, a female voice cried out.
The whole incident didn’t seem right. But Rohit didn’t hurry to respond. He stayed hidden in the darkness.
He was quite long in that house, so his sight became adjusted to the darkness. He roughly guessed the other two figures. Average heights and build, they were holding the girl forcibly by her hands.“Letting you go? Ha ha! You are ours tonight. Cry and shout all you like. Even the Gods cant hear you in such a night.”, a harsh voice replied to the girl. The other male voice laughed mockingly. The girl sobbed and shouted for help ,” Please someone help me.Please. Oh God!”

Rohit wanted to respond but he knew that fighting the two thugs will not be easy for him. Life is not a movie after all. He searched the floor of the room where he was in. He could sense dust and sand and weeds only. His heart was beating too fast .

Slap! Slap! The harsh voice landed two on the girls face. The helpless girl was sobbing profusely. The second thug laughed and pulled her hair,” Such a beauty ! All ours for the night. Don’t worry you will enjoy too! Ha ha.” He tried the kiss her in the lips. The girl struggled to push them away. But their strength was too much for her. She couldn’t stop crying and cursed her fate.

Rohits hand touched something in the meantime. It seemed metal.” Its a rod. Oh! Thank goodness.”Rohit thought. He stealthily stepped towards the room where the thugs were.

They already made the girl lie down. The girl’s hands were tied up by her own scarfs. Her mouth was gauged with a dirty handkerchief of the thugs. The thugs were laughing monstrously , lustily looking at their prize. The girl thought her life was over and a tremendous fear gripped her. She shut her moist eyes.

Adrenaline was gushing through Rohit’s blood. He couldn’t utter a single sound .He was afraid himself . The chance of failure terrified him. The failure would cost him and the girl too their lives. But being successful would also bring a horrible result.

He made up his mind and gathered all his might. He hit the harsh voiced man in the head .The thug fell down like a tree. The other one looked at Rohit, shocked. But before he could make a move, Rohit blew the rod hard hitting the man in his forehead.

Thud! Thud! She heard heavy sound twice. She opened her eyes but couldn’t believe her luck. The two thugs were lying down in the floor. One groaning with pain and another not moving an inch. A liquid started flowing in the floor touching her feet. She understood it was blood. Then she saw the tall figure, holding a metal rod in his hand.
Rohit said while unwinding the knot in the girl’s hand,” Dont you worry! Everything will be fine.”
The girl rose up and took out the gauge from her mouth. She started sobbing. The panic ,the fear was too much to bear.
Rohit held her and help her to stand up,”Its ok.Dont cry now. I will take you to your home.”

“I don’t know who you are and how to thank you for what you have done for me. I am ever grateful and indebted to you.”, She replied in a panic-stricken tone.
“Thank me later. Lets go from here first.”,Rohit replied. She started to walk towards the door with him but halted suddenly.
“I have a job to finish.”,She told Rohit and went to that room again. Rohit followed her. She took the rod from the floor and without any warning she started blowing the rod hard at the head of the groaning thug till he was silenced for good. Then she started beating the unconscious thug. Blood started spraying. She was restless, crying.

Rohit was shocked at the gruesome incident, but he knew what trauma had caused her such action. He took the rod and threw it aside. Then he took the girl by her hand and started to walk towards the road. The rain was still pouring, washing the blood and dirt from their hands. The old house with its dark history would prevail. And so will the two with a patch of terror in their memory. Two unworthy lives were taken and two innocents were saved. Is it not the Almighty's justice?

HIM
Nice writing! I think we can use your writing for our projects, if you are interested please get in touch (email: himanshu_at_smartwebpoint_dot_com) for furher details.
June 14th, 2015
Login to comment
2   ·   3 feedback ( rating and remark )
You can also write on WriterBabu. Know More.