The hardest fact of a relationship. 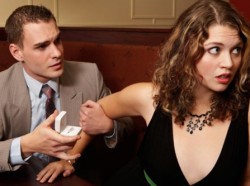 Everyone asks when they see a broken couple "What went wrong between them??".
This article is not only about post relationship but is more emphasised on the relationship which wont even start.

Well so the question is "What is so hard in love, because of which people get tensed, depressed, angry or even commit murder/suicide??"
Well the answer is simple in its own way. Acceptance.
To break it down in simple terms -> The feeling of rejection.

People nowadays cant handle rejection .They just don't want to accept that the other person does'nt love them the same way they do or have the same feelings they possess for the other person. If you have been ever rejected you know what i mean, no doubt any person feels bad and gets depressed. But the person forgets that there is more to life than just love.

The person forgets the people who actually care about him like his family/friends. He doesn't have any idea what they will go through if he does something foolish.
The best way to get out of such depression is being with friends. They are the only one who notice such kinds of things.
Hangout with your friends and you will be fine within a week. Or else keep your mind busy with something productive.

Every week i read some idiot cut off his wrist or jumped off a building due to his partner rejected his marriage proposal or some kind of shit like this. I'm like really? People say love is blind. Yes it is, but not that blind that the person jumps of a building by mistake or cuts his wrist instead of vegetables :D

So what im trying to say is... Yes handling rejection is tough. It has to be. But i think you should look at the brighter side of life rather than doing something idiotic. People think "How can that person reject me, who is he to reject me??!!" Yes everybody does. The fact is you dont control everything in the world. They have their own life and will and can do anything they want too.

Yes if some bitch/asshole is playing with you and you still have feelings for them, then you deserve to die :D
People just look!! I mean really look!!! We are a the progress of 4 billion years of human evolution, so start fucking acting like it!!

SHAMBHAVEE TIWARI.
really inspiring for those who got rejected...:-)
keep rocking div...
January 6th, 2014
Author
Aye aye captain!
January 6th, 2014
ANKITA NADUVINAMANI
Good one again dp :)
January 7th, 2014
PERCY KINGDAWN
We accept the love we think we deserve.
March 9th, 2014
VODKA LOVER
Having feelings for anyone is a personal choice. Nobody deserves to die for that. NOBODY. :D
March 9th, 2014
Login to comment
2   ·   11 feedback ( rating and remark )
You can also write on WriterBabu. Know More.