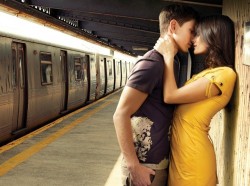 Standing opposite to each other
Leaning on the walls opposite
Staring into each othersâ€™ eyes
She bit her lower lip still looking at him
A mischief in her eyes
With that she put her hair back her ear
Looking down at the floor and then again
Looking at him she suddenly winked
It was just perfect for him
He came close to her
She smiled; he didnâ€™t
He came closer to her
Leaving very little space between them
She, still leaning on the wall, again smiled
This time, he did too
Held her from the waist
Slightly pulling her close to him
They looked into each othersâ€™ eyes
He looked at her lips, then into her eyes, and then again at her lips
Not able to put his eyes off her
She put her hands around his neck
Standing up on her toes now
Trying to match up his height somehow
Yet failing to
The moment was crucial
It was going to happen
Both waiting the other to initiate
She, then, placed a peck on his cheek
It was enough of a sign for him
Both could feel the heat between them
He looked at her lips again
And, finally, he initiated
His lips touched hers, gently
She, with her eyes closed
Felt chills
She felt she was in heaven
And held him a little tighter
Pulling him the closest to her now
Both, standing together
Their hearts touching each othersâ€™
He, leaning down, with his eyes closed
Felt he was the luckiest person on this earth
Having his girl in his arms
He held her from her waist and pulled her up
The kiss was getting intense
Both were lost in each other
With no intention to let it go
Anytime soon
Kissing is like drinking salty water
The more you drink
The more the thirst increases
An expression so pure
An intention to love


Sign In to know Author - VODKA LOVER
Spread the word ...