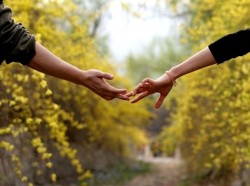 “Dear Jai,
Let me tell you that I’m missing you very badly and want to meet you super soon! Today is June 15th, the day we first met, it might just be another day for you, but for me, this day is really special.
You’re a kind of person who can make anyone smile, and what you’ve done to me is beyond words. You gave me feelings I never thought I would ever have, and for you.. It was never expected. You let me know that love is not just a word but a very beautiful feeling. Your experiences, your thinking, your actions, your spontaneity, your humour, and your heart, there’s so much to admire. And I love your voice, I have told that you a lot of times, haven’t I?
I never thought about us being together forever and ever, that’s too long for me to bear with you lol, I want to share experiences with you. I want to go out on a sunny morning, exploring random places, turning up unplanned and deciding on the way where to go, I want to have breakfast with you at Murthal and then evening tea at a roadside dhaba on our way back, I want to write letters to you and then feel excited for getting their replies. I want to ride a bike with you sitting behind and holding my waist. I want to play hide and seek with you in a dark room hitting random stuff and then having you to laugh on it with. I want to tease random guys in the metro making you jealous. I want you to bake your special brownies only for me and then eating them bite by bite together. I want to hug you so tight that all your broken pieces fix back together. I want to kiss you in the rain and tell how much I love you. But more than everything else, I want you. To be with me.
I’ve realized that you’re such an amazing person, but you know that already don’t you?
Plan kar jaldeeee. Call me apne aap se.
Take care and don’t miss me much.
Love
Shirin.”

He cried on finding what all he had lost in these three years, and sadly it couldn’t be recovered, no new memories could be made, because the one who could have, was gone now.
His heart was aching, of guilt and loss of the one who loved him the most. He screamed to himself, wept, cried, and banged the floor. But mostly, he repented. He couldn’t forgive himself that day.
He quietly went back home and lied down with Shirin’s letters and cards all over his bed, he couldn’t sleep that night.
Shirin’s mother went to her room, touched each and every thing that belonged to Shirin, her clothes, her accessories, her mirror, her bed and even the walls. She didn’t eat for days, she couldn’t sleep for nights together. She couldn’t bear the loss of her beloved daughter.
They all prayed for Shirin, and that lovely girl, would be somewhere happy looking down upon everyone smiling, as she always was- A Happy and charming girl.