The Night that was! 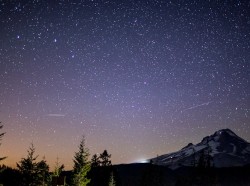 Two silhouettes walked on the side of the road with quick steps, they murmured softly and the one of them looked up at the sky, her eyes were transfixed as her mouth dropped open. She hurriedly pulled on the sleeve of the guy next to her while still gazing at the sky. They came to a sudden stop and let the shimmery blanket of millions of twinkling stars over the village envelop them. It felt like after a thousand years spent as a blind, somehow magically they had gained their vision. And such a vision!

The fresh air in the village had washed the city-grime out of their eyes and the music of water rushing past white gleaming stones had cleared the cacophony in their traffic-prone ears. They made their way through the woods, the smell of nature piercing their mind. She wished to carry that perfume in her mind forever.

As they closed up on the river, they helped each other and sat on half-wet stones, a fantasy, they never actually had, was coming true. He fiddled with his camera and she tried to find the perfect song for the atmosphere but they soon realized their futility. Nothing from the worldly possessions could ever compete against the view their eyes had and no music could have been sweeter than the river rushing by and the chirping of the crickets and all those million instruments that nature owns.