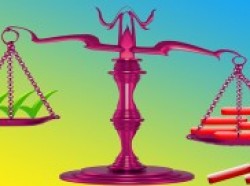 Over the past few years (Okay, decades) I have noticed a change in people around me. I am among the quiet folk, so I keep such observations to myself.

True, changes happen all the time. Weather changes from season to season. Cars change year after year. Technology changes more and more. This post, for instance, would have once been a mere journal entry or letter to the editor in some newspaper.

However, the change I mean has to do with how people like and “dislike”. I see it in Facebook and Twitter as well as Amazon and all other web sites dedicated to showing what is trending or what people are talking about.

When I went to school long ago, I recall people joining The Debate Club. It was simply a club where people would learn to argue with one another. What I remember most is how they would do this while still maintaining respect for one another. The job of each participant was simple: Find a topic that has opposing viewpoints and present the best argument so that in the end, one would be the clear winner. In order to do this, you would have to study everything about the opposite side and know why that argument is being presented. Once that is known, you take each point and do what you can to prove your point of view is better. It sounds simple, and for the most part, it is.

You could always tell who studied more because every time someone tried to argue a point with holes in their reasoning, the one who was prepared made their point more convincing. The opponent would then stutter or backtrack on their reasoning, trying to think of some way to rephrase what they said when it was clear they were losing.

Rare was the evenly matched debaters who could stand toe to toe and argue a point endlessly, each giving convincing arguments for their side and neither stepping back. It was a good way of showing what was truly logical and what well-presented facts could accomplish in a debate.

Over the last few years I have watched several debates that made me think of those club members. These debates were in television shows, celebrity interviews, political meetings and many web sites. Unfortunately, I no longer see anyone treated with standard respect in any of these places. Worse, I see the exact opposite. I see people on television simply yelling at one another rather than listening. I hear name calling and personal attacks that quickly deviate from any topic at hand.

In other words, rational discussions are becoming a thing of the past.

Search for a topic in a favorite site that you find interesting. It might be political in nature or religious. It might have to do with a coming movie or the price of gas. Lately, I have seen topics on police brutality and others on sexual orientation. Each of these could easily begin with a handful of comments from one person or another. They could, but do not. Instead, they spark hundreds, or even thousands of attacks. Not only that, but the more sensitive the topic, the more the attacks tend to escalate, becoming personal attacks, swearing, threats and in the end, the original topic has no possible means of becoming resolved calmly.

When people refuse to listen to one another, the most convincing facts cannot be heard because hate is too prevalent. That is where I see topics go to these days: HATE

It’s not just that you like this politician or dislike that one, it’s now about how MUCH you hate that politician or party or group or religion or, or, or… Hate is quickly becoming the only means of debate. We no longer bring up how much we like something or someone. We hesitate. We stop and think twice instead of allowing ourselves to like what we like.

I like the Apple iPhone. I have liked how it works since its inception and I like what it can do. It is a useful gadget and I am amazed at how technology has brought us to this level of achievement.

If I go on a news site and post my praise under an article highlighting a new i-gadget, the comments that follow might begin with a simple “Me too!” but end with personal attacks against me and the store that sells it, the cashier who sold it and the company as a whole. There appears to be no one teaching respect for one another in school anymore. No care for your fellow man and no self-respect by those who post hate-filled comments online.

Where did all this come from? I would much rather find others who like something and have a discussion about what it is and where it can go from there. I would prefer to say I like the new Avengers movie and talk about the comics that had the original story followed by where the movies will go from here. Instead, I will hear about what the actors might have said or done in an interview that people hate or what the director believes or doesn’t believe and even how unrealistic the special effects or action scenes are.

Really? It’s a movie! A form of entertainment! You’re not supposed to go in and find things to hate about it, you’re supposed to go in because it looks cool and you want to spend a couple of hours enjoying the story and action so you can depart from the real world within a given bubble of time.

Sadly, discussions have continued to degenerate all around us. Rational thought continues to fade. What’s the point of learning what is true and what isn’t when all you need to do is raise your voice and make personal attacks to shut the other person down? Stores can now be shut down if they don’t cater to people demanding they violate their religion. States are being boycotted for passing a law trying to safeguard religion in some form or another. News stories are now used as encouragement to riot and burn cities with no consideration for order or reason.

Yes, schools are at the front of the line when it comes to blame as well as parents, but politicians are now in the mix alongside the media. Those who were not around when News truly meant something and was watched by grownups for truth and world events can’t know what it was like to have a time when you could enjoy a day with friends and laugh about multiple topics… even when you took a different side.

We all have a different point of view. How can we not? We don’t live the same lives. We see different things and learn different lessons. What matters is what we do when we find someone who likes the opposite. Steak eater meets Vegan, Gay meets Straight, Democrat meets Republican, Apple meets Windows…

I like many things: The outdoors on a sunny day. Chocolate caramel ice cream. Gadgets that make things easier or more enjoyable. Writing down stories that I imagine and dream of. I also like tales of adventure, stories of true love, self-sacrifice… heroes. I even like some speeches given by politicians. Their party affiliation never matters to me and I hope it never does. If I start cheering for a team instead of a person then it is only a matter of time before that team can be switched out with those I would never want to support.

I would like to find out what it is that people like rather than the things they hate. Think of it as a balancing act. If you imagine a scale of your preferences and you load one side with things you enjoy or people you like then good feelings will follow. However, if you take the other side and overflow it with things you hate, movies you despise and people you can’t stand, religion you don't want or opinions you disagree with... Throwing one personal hatred on top of after… How long before you realize that the side you pile within you is making you lean your entire way of life in that direction until it is the only side you see?

My hope and advice is simple: Stay positive in your life by adding “likes” to yourself and to others. Add something every day to your well-being. Add to your joys. Add to the things and people you love. Hate will subtract all of these from you if you let it.

The choice, as always, is yours.

SHAMBHAVEE TIWARI.
master peice! one of the best post ever read :)
April 24th, 2016
SUNITA UPD
Time for thought. Fear - this what resides in most people's heart...at the onset, of the system then it became their own insecurity...introvert despite being famous on networks and one day, one may become so antisocial that there will be fear in even holding a conversation with another. The world needs to reinvent itself and soon, for the welfare of humanity...
April 24th, 2016
Login to comment
2   ·   2 feedback ( rating and remark )
You can also write on WriterBabu. Know More.