TRAGEDY OF THE COMIC WORLD 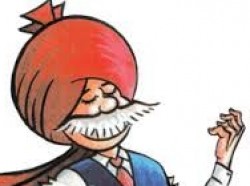 The colorful soul escaped through the tiny pores of the white sheet that covered his still body. As another colour from the rainbow of our childhood memories fades away, the cancer cells could be seen congratulating each other under the sharp focus of electron microscope. Yes, they can now boast of another victory. They have not only won the year long battle but while doing so created an irony. They have finally managed to take life out of 'Pran' !

The calender showed 1969. The sun was smiling. It knew something remarkable was going to happen in the land of heroes like Rama, Krishna and Arjuna. A new hero was at horizon. When the west was busy with developing superheroes and their superpowers, a 31-year old cartoonist was all set to present India with its very own, desi hero. Who could have believed that a short, bald and old man with a red turban was going to make the childhood of the next two generations more than memorable? The westerners must have laughed for it was beyond their imagination how a man who is afraid of his own wife and half her size could possibly save the world from goons, thugs and rogues without any superpower. They were too busy getting caught in the webs of Spiderman, to notice that there still existed some parts in the world where heroes actually preferred to use their brains. At the time when Indian comics' readers were fed up of reading the translated comic strips and reprints of Phantom and Superman, Pran decided to give them something original. And thus Chacha Chowdhary was brought into the limelight, something that he has enjoyed ever since. After Chacha Chowdhary, he went on to put Billu, Pinki, Raman, Shrimatiji and Channi Chachi to life. Anyone who has read these comics can easily tell that there was one thing common to all his characters : presence of mind. Pran must have realized that if his heroes/heroines have to compete against the then superheroes, he must have something more powerful and what can be more powerful and interesting than brain?

Pran remained a cartoonist throughout his life , but today he can easily qualify as a visionary, even if he never intended to be one. His characters had more depth than we actually realized while reading. He taught us that there is not a single problem that can not be solved by putting our brain to use. Through Chacha Chowdhary and Sabu, he showed us that intelligence controls the power. Pran never gave us a superhero, but he gave us a super villain: Raka (who can not die). The clashes between Chacha/Sabu and Raka showed that evil and problems do not die and we have to face them again and again and their combined efforts made us believe that with proper combination of brain and muscle, we can always beat our problems and come out victorious. And can there be any bigger example of empowered woman than Binny Chachi or Shrimatiji? His 'Raman- Hum Ek Hain' promoted national integration and hence it was released by the then Prime Minister Mrs. Indira Gandhi. No wonder Maurice Horn, the editor of World Encyclopedia of Comics has referred to Pran as "Walt Disney of India".

Childhood of those born in the 70s, 80s and even the early 90s can't be described without mentioning Pran's comics. It was the time when the sentence "चाचा चौधरी का दिमाग़ कंप्यूटर से भी तेज़ चलता है " would be more popular than "He's the hero Gotham deserves but doesn't need right now" or "जब साबु को गुस्सा आता है तो कहीं ज्वालामुखी फटता है" would've made more sense than "With great power comes greater responsibility". We admired Batman, Superman and Spiderman but we loved Chacha Chaudhari, Sabu and Billu because they seemed as familiar as our next door neighbours.

He once said "If I was able to make even a single person smile, then I consider my life was worth. "
Pran sahab! You have made almost three generations smile and you'll continue to do so. Thank you for making our childhood colourful, interesting and full of smiles. May your soul rest in peace !!!