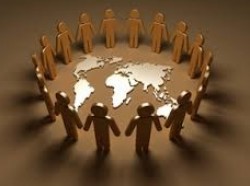 The dusky sky has a shade of yellowish orange transcending from the setting sun. A chilling breeze has started to flow giving shiver to the spine. But enthusiasm of the young boys didn’t seem to diminish even a little bit. The field where the annual fair sits in every Diwali, was getting ready for this year’s festival. Kids in groups were playing football, cricket etc. Away from the crowd two little boys were flying a colourful kite standing at the edge of village’s pasture. The kite was whirling in the wind taking sudden turns.
Their unexperienced tiny hands couldn’t get hold of the kite any longer which tearing itself free, flew away hiding in the horizon.
“Oh no! My new kite.”, one of the boys almost started crying. He wore a white kurta and pyjama. His bright innocent eyes have a border of kohl. Despair and sadness has darkened his mood.
“ Don’t worry, Rahim. I will give you one of mine.”, the other kid tried to comfort him.
Rahim’s face lightened up and he promptly hugged his friend,” Ram, you are my best mate.”
The sky suddenly shadowed as they started walking towards their village holding hands.
Dadarpur is a beautiful village which has two schools and a well maintained health centre .Most of the villagers are either farmers or workers in the factories at the town nearby.

Rahim lives by the Old Banyan tree which is just beside the fair’s field. As they neared the colony a commotion could be heard just in front of Rahim’s house. A group of people holding bamboo sticks in their hands were seen having a heated argument with Rahim’s father, Abbas Ali.
“ We have let you live in our village and you have polluted this holy soil with Mother Cow’s blood! You should be punished.”, a tall figure seemingly the leader of the group spoke agitatedly.
“ How many times I have to tell you that we haven’t eaten beef. You must have false rumours.”, Abbas Ali tried to convince the leader desperately.
With terror in their eyes both boys stood like statues near the wall of the house. Rahim’s mother Jahnara looked equally shaken. She stood with her husband holding Rukhsar, Rahim’s sister. Jahnara noticed both of them as her eyes met with Rahim’s. Slowly Rahim joins his family .The five year old has been so scared that she was sobbing profoundly.
Ram didn’t move. He was listening to the argument trying to understand the whole scenario. Even in such a weather he was sweating nervously. He counted the number of people holding bamboo sticks. Most of the faces were known to him. But he was shocked when the lantern’s light fell on the leader’s face .It was the most familiar one he had ever seen. It was his grandfather’s.
Ram’s grandfather, Madhab Singh, was the head of the village. He never liked Ram’s friendship with a muslim boy. But children do not have the complexity or narrowness of an adult heart. So despite all rebukes, Ram would always find a way to sneak out from his house and play with his best friend.

It was only last year when Ram had fallen ill and Rahim’s whole world fell apart. He used to come everyday beside the window of Ram’s bedroom and have a look at his mate. Some days if Ram had been awake they had quite some conversations. Rahim prayed at the mosque everyday for Ram’s well being. Secretly he even gave Ram the holy water from there.
Ram felt sad that his own grandfather was abusing his best friend’s family. Abbas Ali was repeatedly asking him to resolve this matter. Ram saw that to cool down the mob Abbas chacha even asked for forgiveness. To his horror he saw that suddenly someone threw a stick at Abbas which missed him and hit little Rukhsar cutting her forehead. She was screaming in agony. And that didn’t even stop there. Two or Three people called Rahim’s family names and attacked Abbas with sticks. Adding to the pain of Ram, his grandfather didn’t even tried to stop those guys. He stood a mute spectator.
A group of people slapped Jahnara chichi when she tried to stop them from beating her husband. One of them even pulled her hair. It was too much for Ram. He ran towards his grandfather.
” Dadu please tell them to stop. They are hurting Abbas chacha and his family. Look what they are doing!”, Ram begged before his grandfather and started sobbing.
“ Kid you go home now! Its elder’s matter. I told you not to mix with such family.”, Madhab Singh ordered him furiously.
Rahim was being kicked and punched as he was trying to save his ammi.
“Rahim!! “ ,Ram’s voice shrieked seeing his friend getting beaten up. At that moment a muscle man from the village took a stick and swing it hard to hit Rahim. Seeing this ,Ram ran towards his friend and jumped to save his friend.
“Thuddd..”the stick hit something. And the whole chaos stopped. It was total silence there as if time has stopped. Rahim started crying.
Madhab Singh cried out,” My kiddo!!”
Ram was bleeding severely from his head as he lay on the ground. Madhab Singh ran towards his grandchild and started crying as he took Ram in his arms.
“What have I done! Ram don’t you leave me son!”, he panicked.
“Da..Da..Dadu! Don’t hurt my friend”,Ram uttered with great pain.
“ I wont kiddo .I promise.”, Madhab Singh affectionately hugged Ram. But Ram couldn’t hug him back. His lifeless little body lay in his dadu’s lap as everybody in utter shock kept mum. A young innocent soul departed the earthly world. He sacrificed himself in the name of friendship and humanity .And most of all for the sake of giving back some sense to the people, who in the name of religion do not even hesitate to take a life.