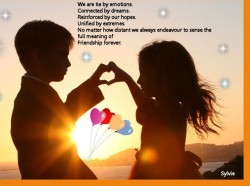 Some incidents are not so easy to forget and some are worth remembering. An event which may seem a setback, can also have another angle. It’s how we see that matters. One partially filled glass of water may be thought of a half empty one or even half filled. It was five years ago when the incident happened. Duke was drunk, sitting in a pub. He was having hard time coping with the bitter truth. Even the whiskey seemed sweet enough than the reality. He emptied 7-8 pegs and was in no mood to stop either.
“Sir we are closing now. You have to leave now, please. We can order a taxi if you want.”, the waiter requested him. Duke looked at the waiter, wanted to argue with him. But he couldn’t. Words didn’t come to his lips and he was feeling dizzy.
“ No ,thanks. I will manage on my own.”, He uttered staggering.
He got out and started walking without thinking of where to go. The large giant bridge seemed familiar to him. It was looking heavy and mighty in the night. The road was busy still at the peak of night. “Howrah Bridge it is. How many times we have taken a walk together through it. Irony! Isn’t it.”, He thought.
Too much alcohol in nearly empty stomach had taken its toll on him. He started vomiting holding the railings the bridge. The water of the river below seemed dark and calm. The after rain breeze was gushing through his face. Duke hadn’t had a shave or a shower or a proper meal in nearly last 48 hours. The cell phone was vibrating since last couple of hours. Duke didn’t bother to look at it. He knew who might be the callers. When the life goes upside down and there is little to do anything about it, there is nothing that can bother a person. The cell didn’t stop ringing. He took it up and talked. What he talked about and to who he couldn’t remember later.
Its been six months since he got fired from his job. It was the recession. When the stocks dipped the companies freaked out and pushed thousands of young talents out to save their skin. The sudden shock and the brutality of the event crushed Duke’s dreams. His parents didn’t blame him even a little bit. They were supportive. He had hoped that things would change, but it didn’t. When people are in distress only then they can understand who their true well wishers are. In the beginning most of his friends and relatives showed sympathy but soon started to ignore him. Only his adamant best friend from school, Sri was an exception. She would come to visit and try to convince him to go out. But Duke didn’t pay heed to her.Things got worsened when the girl he was in love with started to treat him coldly. She first started to ignore his calls and messages and later shamelessly called the relationship off. Duke couldn’t believe that Ritu could do that. The childhood crush, the relationship of nearly six years would fall apart. Duke was broken down completely. He started to sulk in his own room, seldom going out. Smoke of cigarettes and empty beer bottles filled the room. Sri tried to fix an appointment for Duke with a psychiatrist who was a friend of hers. But he didn’t meet the counsellor. He was ashamed of himself, his confidence shattered. Two days ago Ritu came to his house and handed him the invitation card of her marriage. Since then he was out of home, roaming here and there.

“ Is it the status that defines people? Is it the success and wealth only that matters?”, he thought to himself..
He found himself lying in the footpath. He slept there like a beggar. It was early in the morning. He was feeling neither hunger nor the urge of returning to his home. He sobbed thinking about his life. Then suddenly he started to walk towards the railing and tried to climb on it.
“ What is the use of such a useless life. Let it be the end of all misery.” , He thought to himself. The Ganges looked vast, eagerly waiting for him to join her and submerge to the flow of eternity. Duke’s eyes were moist. Before today he had tried to commit suicide many a times in past few months, but each time he couldn’t gather the courage to do it. Was it the fear of death or the pain of will to live, he couldn’t fathom.
“ Desperate times needs desperate measures.” He thought .
As he was about to climb another step on the railing, he felt a sudden pull on his shirt . He fell on the footpath and blacked out.
The room seemed like a clinic and familiar. He was lying on a small bed. His forehead was bandaged, and his bruised hand had some ointments applied to it. Duke thought his parents must have been there. But all he could see was a rack full of medical books and a small table.
“ Hey! You Idiot! How are you feeling now?”, a female voice asked him. Duke looked at her, surprised. She was wearing a doctor’s coat and a stethoscope was hung around her neck. He couldn’t utter a word. It was his best friend, Srinjini.
“ Dont worry ! I didn’t tell aunty about your stupid stunt. She knows only that you had an accident. She is coming though.”, She said calmly.

“ How did you find me?.”, Duke said checking his head.

“ You were drunk .And you took my call last night . You were saying that you want to sink in the Ganges.” She answered looking at him.

Duke was silent. He didn’t know what to say to her.

“ Don’t you know what I am going through ,Sri? Why save me?”,Duke heaved a sigh.
“ Yes I know .And I tried to talk some sense to you before ,which you didn’t listen. If you haven’t have stitches on your head I swear I would have slapped you hard by now.”, She countered angrily.
She couldn’t hide her tears.

“ You were going to leave us forever Duke! Where was your promise of being friends forever? Forget about me. Did you think of uncle and aunty? I was always there for you, so were your parents. You are their only son. How would they live without you? How would I? ” She broke down.

The two didn’t spoke for some minutes. Duke placed his hand over her.
“ you are young and talented. You will get a job again. And as for your Ritu, I can say that she does not deserve you. Don’t ever think doing such stupid things. Please don’t ever leave me.” She continued emotionally.
Duke was moved. He hugged Sri. She sobbed like a child . For the first time since he woke up he made eye contact with Sri. Her eyes were sincere and caring. She looked like an angel.
The present day

Duke is looking at the photo stand on his table in his office. A grin appeared on his face. He is a professor in a renowned college now. The picture is of his loving wife, Sri. The two got married last year. The angel of his life was looking towards him, smiling.