Tzinga â€“ the key to survive at IIT 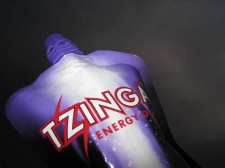 "Ok! I am not that proud to be an IITian but yes I have made it to one of the greatest institutions of this great country. Bas! As you must be wondering I just got over from my exams. During the course I found this energy drink, widely available here at IIT Delhi.

At times I and my friends are on the lookout for something new and refreshing. This happens mostly during exams. When we return from reading room or windT after turning thousands of pages and handouts â€“ we kind of look for either an Apsara or some Amrit (hope you understand). Apsara inside IIT is unheard off (they are deliberately kept out of our reach). Amrit is expensive especially for students like me. So, may be engineers have invented beverages by the name of energy drinks. I have to admit that the only energy drink I have had in this lifetime is Red Bull, taste of which sucks. I will not drink that cough syrup unless I get free cans from hot Red Bull college samplers (DU i love u). But seriously, I found this drink, by the name of Tzinga (they sponsored an exam at IIT). It does not come in a can, rather it comes in a pack. The best thing about the drink is the price. Wow! Ask any IItian and he will tell you that whatâ€™s the value of money? Energy drinks at Rs 20, unheard off (if Late Steve Jobs was an IITian, he would say iLIKE).

So, coming back to exam stress â€“ when first few drops of the mysterious liquor coming from plastic sachets come in contact with our taste buds, it kind of feels like worth few sweet drops of water after thirst of months of wandering in the Sahara desert. Tzinga is different from other drinks. I associate its taste with freshness â€“ which I need every now and then. The experiment on me has been quite successful. Tzinga works well when I was preparing for my exams- basically it rocks. Plus the taste, it is anything but cough syrup. The fruit base really works. The best flavour is tropical trip. It has a tangy mix fruit juicy taste and is quite close to black current. The mango one is totally juice which does not suit me, may be it works for girls.

I believe this product is good. It works. It costs less (affordable for student). It tastes good. It looks for youth. An IITian prediction â€“ it will work like anything in student space. All they need is to provide an exam helpline which deliverers Tzinga at door in odd hours. The best thing is that it comes from an Indian startup. Being in IIT I always wonder the execution of the new innovation. I have seen cult innovations during our annual fair but have never really seen them bringing a huge change for end-consumers. May be we need to streamline red tape even more. But optimism is in the blood of IIT, we have done hard work prior to get admission, do a bit more to pass successfully and obviously later in the corporate."