What happened to my generation?? 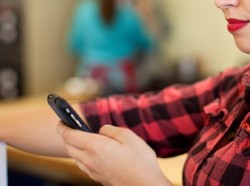 WTF . Isin't this your age to study, play on the ground?! Eat ice cream, drink coca cola... Wet your head due to the sweat of the sun ?! I just think what is going to happen after this generation grows.
I literally see some of my "girl" friends (Just calling them friends other i wouldn't even prefer calling them acquaintance) posting some half nude pics on facebook. Its not that i have any problem but WTF ??!! Their duck faces and always bent photos ?? What are you girls really trying to do?? ... Are you applying for some job at the strip club?? If you think your going to get a nice guy by doing this, your not even close to "NOT CLOSE". Its just not going to happen. You may just get likes from some perverts.

I mean seriously if you dont have enough clothes to wear i will be glad to donate some to you!! Even models on facebook have decent photos in their profiles!! Cant you people just click & post a normal photo ??
And these are the same girl then saying boys always behind my body. I just speculate these things and laugh loudly in my mind.
Let me tell something, A women's biggest asset is her simplicity & her smile. A nice guy would always try to find these two things in you.

Now you may say why are you just talking about girls? When did i say boys were back in this field? Posting selfies of their upper body and their six packs... (-_-)... I say "Do you want to open some page for a gym??" Girls actually see such pics and like ewwww. What a jackass.
I see guys wearing skinny jeans. But these people dont understand these type of clothes are designed by designers for healthy and muscular people. Not for other people! Seriously you look more than gay in such clothes.

I think if your parents see these photos they will be the most proud people on the planet.

The height of so called "Desponess" on facebook is beyond compare!!
People "Attention is what you need to gain not crave"

One more incidence i remember of is my friend telling me his story.
He was returning home from college and met his friends younger sister who stayed in the same building. She was wearing a short skirt. Even he thought it wasn't at-least necessary to wear that while just hanging in your locality. He was having a small conversation with her about studies and her goals when her mother came along from behind. She started shouting on top of her voice about the clothes she was wearing . Can you imagine the level of awkwardness?? He just stood there as she was being scolded. And just to worsen the situation her mother asking him if it was decent for her daughter to wear such short clothes. What is he going to say?? Hahahaha.

I had an hearty laugh while he was narrating this story to me.