Why I love Ranveer Singh? 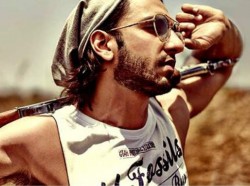 Well to start with,I know this post is not gonna be read by many but since I am a true Ranveer Singh shipper,I would still go ahead...Why do I love this man?Too difficult to explain,too difficult to keep mum....
So,this new "Energiser Bunny" as many stars fondly call him,is something to watch out for.He might not have notched the "STAR" status as yet but he has all the stars in his favour.
After Salman Khan(who,only in his post forties has been seen like this),which other star can you think of,who's mad,unique yet genuine and manages to grab eyeballs at right things?I can only think of the one and only Ranveer Singh!
Love him,hate him but Ignore??Nobody can do that.This guy experiments,with his looks,his movies,his interviews and lot more.The part I believe,all of us can relate to, is his real self.Minus the PR and public status,he says what he wants,he does what he wants.....One day,you can see him pulling off a shiny glitzy outfit,other day,he'll be all sober.The man,the only present actor of the lot,whose pictures and selfies with fans,wherever he is found,appear the happiest.He knows he is what he is because of these people only,unlike some who are just so jetlagged or irritated at the fans and media.
Ranveer Singh has always been a darling of all his co-stars.I cant remember any article putting him in bad light,sure,they may not like his film or looks sometimes,but the real RS is always loved.
And hell,this guy can love!Love like nobody else.So when he is mesmerised by the stunning girlfriend Deepika Padukone,he won't try to be politically correct,and can go on lengths to show his admiration.Just this statement of his-"I can't hide my feelings and it takes a lot of effort to be closed about things I feel for" is proof enough.Tell me,which girl in the world wont like a guy like that???
Not just the good boyfriend,he sure is THE best friend like a rock as well.So,he doesn't give a damn whether he is on the 'oh-so-elite' show Koffee with Karan,when he sees his best buddy,he goes all mad.From singing stupid songs to 'Baba i love ur pants,i love ur shoes baba'...This man has my heart!
His energy is infectious.How I'd love to be in his best friend list.A friend who'll take a bullet for you and make you laugh your asses out on normal days,isn't that just the right definition of a FRIEND?
Believe it or not,he is the next generation Star.Cuz not only his performances(I am still in awe of Bittoo Sharma from Band Baja Baraat),his antics are also camera friendly.So,he doesn't fear the slack before or after doing a AIB roast or a condom ad,he'll do mad things infront of a live audience or he'll live tweet from the Operation Theatre,Be it shaving his head off or dancing live on the road-HE can do it all!Cuz this guy is so comfortable in his own skin....

JYOTI GUPTA
Liked your post. I too admire Ranveer Singh at times but still stardom is all illusion of a star's personality at times. Hope to see more good work from this guy in future as he has the ability to perform way beyond.
May 19th, 2015
Author
Truly,he HAS the ability to perform and outdo others :)
May 21st, 2015
HIM
Nice writing! I think we can use your writing for our projects, if you are interested please get in touch (email: himanshu_at_smartwebpoint_dot_com) for furher details.
June 14th, 2015
Login to comment
2   ·   8 feedback ( rating and remark )
You can also write on WriterBabu. Know More.