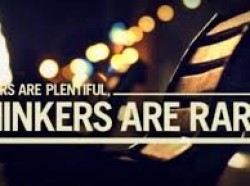 Spring bloomed to her fullest, mild wind has become her messenger again like all the years. And he was sitting on his armchair gazing through the window with his vacant look. His frustrated fingers were grabbing a pen and paper. The stage has been perfectly set up for him to give birth of a new short story for the next month’s magazine, but most unfortunately his imaginations could not gather up to form a new creation. The innocent piece of paper contains nothing except the various scribbling and drawings which is the reflection of the waves flowing through his grey-cells.
The phase had begun a couple of days ago. A single sentence has not been written since then. He is simply unable to pass anything through the pen which has undergone too much torture of his teeth. He tries to focus hard all day but the paper does not get filled with anything meaningful. No word seems sweet to his ear, no plot is leaving any impression in his mind, and he has even given up listening to music. His eyes traversed his room, took a small, insightful pause at the book-shelf where trillions of words are sleeping happily inside it, but ironically his head was not capable to create any symphony with words. In spite of all his sincere efforts, the result is only a heap of slaughtered scrap papers with their corpses sleeping on the floor.
His mind was functioning in a strange manner. Sometimes he was thinking of his favorite novels, and how he could get an inspiration from them. Then, he tried to remind of the day when he conceived the plot of his first story, the precious moments when his writings were born. He considered himself to be a novice Indian opener who has been thrown away to face the famous West Indian bowling attack on the first day’s windy morning at Antigua, although he had less fear of getting dropped in the next Test match. He even wished he had some addiction of cigarettes or alcohol which could have accompanied him during these tough days. He dreamt how getting high would be like. His uncomfortable numbness has caused him 48 sleepless hours, but now he would love to wake up from this trauma and to see that it was just one of his worst nightmares.
It is the worst writer’s block he is facing. If you watch him carefully for a few minutes, you’ll certainly observe nothing is getting changed around him. He is lying on the couch in a pensive mood. His canvas, the torn sheet of paper is waiting eagerly to be painted with colorful thoughts. Only the nib is getting dried with every tick of the clock.