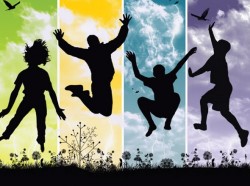 The shirt was soaked in sweat as he woke up almost jumping from the bed. Ticking of the clock was clearly audible, which was there somewhere on the wall. His eyes took a few moments to get accustomed to the darkness. His hands forwarded towards the bed table beside the cot and searched for the specs. Putting on the glasses he wandered from the room.
Its Rohit’s new rented residence in Bangalore. He joined a reputed MNC here as a fresher. Some people find it hard to sleep at new places. Rohit too belonged to that category.
Though this single bed room flat was really miserable in every aspect, only upside was its open balcony. Even at the dead of the night the city was awake. The belt of street lights on the flyover and the passing cars were the sign of the city’s insomnia.
Sitting on the chair kept in balcony he looked upon and wondered how many night owls like him would have been awake keeping the city alive.
“ So peaceful yet so busy. The Tech city ….Bangalore. And I am here with thousands of others to get assimilated in the blood stream of it. ” Rohit thought.
The laptop lit up on his lap and the familiar tone and wallpaper welcomed him. The weekly assessment was just knocking on door and Rohit hadn’t yet started preparing. Having nothing to do else, it occurred to him that it would be better to review e-notes and ppts distributed during the training.
But his restless mind wandered off from thoughts to thoughts. Absentmindedly his hand was scrolling the mouse in the window. The pointer was suddenly on a folder named ‘LastHangout’ and he gazed at it.
As he opened it memories started pouring. Through the lovely and amazing pictures he had a vivid flashback.
It was the last semester of B.Tech when Rohit and his buddies planned the outing. Three of the friends’ B’day treat was due and they arranged for a grand treat. It was decided that first they would have rides in the amusement park and then lunch. Rohit and Saina were early but the rest of the crew became late due to traffic. The combined ticket allowed them to have free rides most of which were pretty boring. He still remembered that how he had to beg Rahul and Pratik have the horse ride. They mocked,” Are you a kid? Its all girly. We wont ride.”
“Come on man ! We have come to enjoy. Lets do silly things.” Rohit had persuaded.
A smile broke on Rohi’s face thinking how childish they must had been looked then. How they teased him saying the wooden horses might break down under his weight!
And of course there were photo sessions, taking weird face selfies and groupies. He recalled how the three boys of them stood on the bridge and pose like the three idiots..
Pratik, the tough guy had freaked out in the rollercoaster while Rohit was filming him on camera to keep that video as a proof.
Boating session had been awesome too. But Pratik and Rohit did nothing the entire period while Rahul, the muscleman , did all the labour of paddling and steering.
The striking car where they crashed on each other’s car was too much fun. The cars had faulty steering but who cared as long as they did enjoy themselves!
And then there was the water chute, the most entertaining ride of all. Shree and Rahul ran to take the first set of seats followed by Saina and Sreeja. Pratik and He waited to take the third set of seats. But the seat on the left had drops of water.
“On this side the water will fall surely , I will take the other seat. It looks dry.”Rohit thought,” I guess Pratik needs a bath.”
Pratik didn’t notice the water and sat on the wet seat. The cart started and pulled itself up while building up speed. Suddenly taking a u turn the track elevated down and finally running through the underwater track. Water splashed everywhere, wetting almost everyone .But Pratik was the guy utmost affected and nearly drenched in water. The cart took turn and started running for round two.
“Guys! See,Pratik is all wet.” Rohit devilishly smiled. Everyone broke out laughing. Well almost everyone!
“I will beat you up Rohit the moment this bloody cart stops!”,Pratik replied shouting,” You devil! You planned this.” Luckily Pratik didn’t kept his word.
The toy train was the last ride they took .The groupies they took there were quite funny.
At last in hungry stomach they entered the last destination of the day, a reputed restaurant named, Crystels. Well the zomato rating didn’t seemed quite right when they tasted the food. Indian dishes were satisfactorily but the Chinese counterpart weren’t.
Last but not the least ,the birthday boy Rahul forgot his gifts before he took his bus home. Pratik had to hand the gifts over to him later though he wanted to keep the perfume from those.

Nostalgia kept Rohit’s mind busy while he cherished the moments and laughed. “Arent those the best days of our life!”, he wondered. They drifted apart just after a few months from that day getting busy in their own careers, in their own course of life.
“Those days of fun, fights, gossips and hangouts seem a distant memory now. Far but still vivid and alive.”,Rohit turned the laptop off and looked at the group picture hanging from the wall. He wished that all those buddies might miss the old days like he did and might be someday they had another such hangout. As he looked on, the first beam of sun rays falling on the wall radiated all those joyous faces as they looked perfectly happy and content.

SHRAMANA CHAKRABORTY
One of your bests
November 10th, 2015
Login to comment
2   ·   6 feedback ( rating and remark )
You can also write on WriterBabu. Know More.